Snoring seems like a trivial thing until you find out your poor sleep is from snoring or you find that your partner ends up on the couch every night because of your habit. There are a number of reasons why snoring happens but the fact is that it happens to many different people, with about 30% of adults are habitual snorers.

If you or someone in your home snores nightly finding a solution begins to become a serious concern for everyone involved.

There are many anti-snore devices (like Snorerx, etc…) on the market but mouthpieces and oral devices are naturally the most popular. There are numerous mouthpieces on the market that claim they will end snoring for good but often times they fall completely short on their promises.

However, two fairly popular devices check out as the real deal – the ZQuiet and the Zyppah.

If you want a mouthpiece that works like it’s supposed to but is torn between a classic anti-snore device and a new hybrid design, here is how they compare. 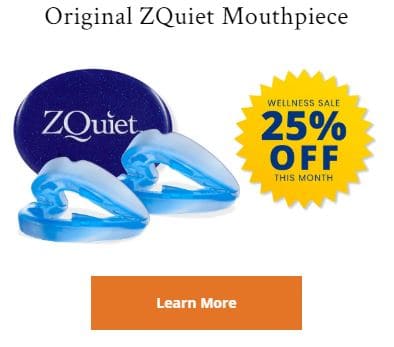 The hardest part for me about snoring devices is the awkward and uncomfortable feeling for me. This is why I PREFER the ZQuiet solution as it's much less intrusive, easier to get used to, doesn't require tongue displacement.

Try ZQuiet Here First
We earn a commission if you click this link and make a purchase at no additional cost to you.

Disclosure: Sleep Solutions HQ may be compensated through the links in the post below, but the opinions are our own

First Up: What is the ZQuiet? 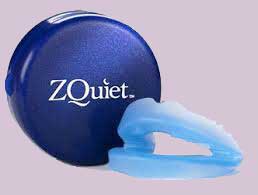 One of the most successful anti-snoring mouthpieces is the ZQuiet. This fairly simple looking hinged device is very effective at preventing snoring and uses the tried-and-true method of jaw displacement. The ZQuiet is a popular choice for those that want something affordable and easy to use.

Priced at under $80, the ZQuiet is very competitive in retail value and their 30 Day Trial is a great choice for those that are wary about anti-snore mouthpieces.

The ZQuiet works by moving the lower jaw (otherwise known as mandible or mandibular bone) upwards to open up the airway and prevent the vibration in the throat that is snoring. Some people that sleep on their back relax when they fall asleep and the lower jaw sinks backward, blocking the throat. This causes a vibration which is what snoring is.

Though it works like many other jaw displacement devices the ZQuiet differs in some key areas, such as the hinged back for instance.

The ZQuiet has a hinged back which is unusual for this type of mouthpiece. The hinge doesn’t affect how well the ZQuiet mouthpiece prevents snoring, it works just as well as unhinged devices, but is actually more comfortable for users. The ZQuiet allows you to move your jaw side to side slightly and open or close the mouth. Once accustomed to the device some customers can even take a sip of water at night without having to remove it.

The goal of ZQuiet is to end snoring in the first night. So far it seems as though many do get relief the first night, though it isn’t unusual for users to have to take a couple nights of getting used to the mouthpiece before they are able to really relax and sleep well. There are also two Comfort Levels, 1 or 2, with the Level 2 offering more jaw advancement than normal. If you really have a slack jaw and Level 1 isn’t working or stops working effectively you can move to Level 2.

What is the Zyppah? 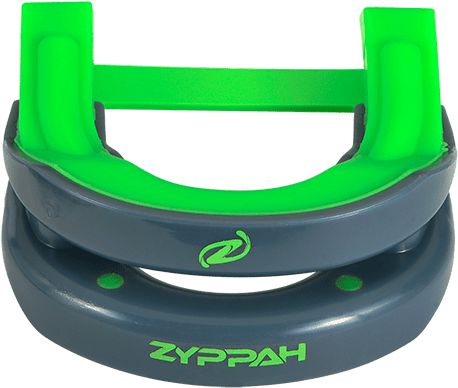 There are very few hybrid anti-snore mouthpieces on the market but the Zyppah is right up at the top. This interesting device has been featured in numerous magazines and so far seems to be a well-designed product. It is more on the expensive side but the brand makes it clear that they have a large number of positive customer testimonials supporting how well it works.

The Zyppah is immediately eye-catching with its neon green and black color scheme. One look at the device also shows that it works differently than the ZQuiet. While the ZQuiet is your typical jaw manipulating the device, the Zyppah not only works with the jaw but also with the tongue.

The mouthpiece holds the lower jaw outwards like the ZQuiet but it also has their Tongue Elastic technology, which they describe as a seatbelt for the tongue. This type of tongue stabilizing device can be the difference between an effective and ineffective snoring solution.

The Tongue Elastic holds the tongue out of the way of your throat, helping to prevent snoring even more. Though it isn’t too common it is possible for regular jaw manipulation to not solve snoring completely because it’s actually the person’s tongue blocking proper breathing. The Zyppah kills two birds with one stone but addressing both potential issues. 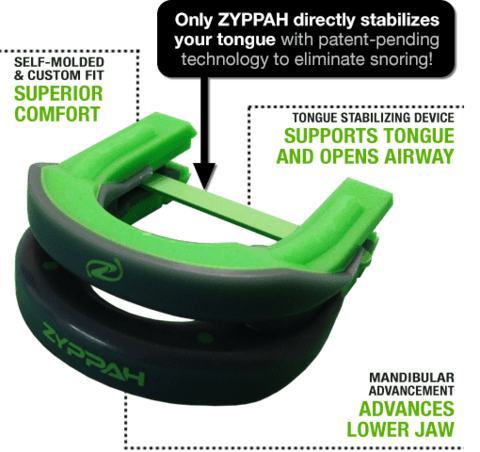 It goes without saying that the addition of the Tongue Elastic is a great idea but it also means users have an additional thing in their mouth that they’ll need to get used to. If you’ve had experience with other jaw displacement devices you’ll know how the mouthpieces aren’t always comfortable at first.

This is even more true for the Zyppah as many find they get used to jaw displacement much faster than something pressing on their tongue.

Does Zyppah help with sleep apnea?

“Most sleep apnea is caused when the air passage in the neck relaxes in sleep (It does for everyone). Some people have smaller air passage than others (due to fat, injury or defect) so this relaxing causes it to become so small that it actually closes and stops the breath. After several seconds the body notices and fights for breath, re-tensioning those muscles, opening the airway, and then sleep and relaxing reoccurs and the cycle happens again maybe as fast as a minute later. But if most people were somehow able to push their lower jaw forward and hold it there while asleep, this air passage is forced open and this breathing blockage cycle does not keep happening. There is a better version ($700?), a dental appliance, that you can get from a dentist.”

“Yes yes and more yes. I didnt realize what I was missing in terms of a good night’s sleep. The zyppah is amazing.”

“My husband uses this, and he and I are both sleeping better. HIs only complaint is that his jaw is sore in the morning. It definitely eliminates his snoring which was deafening.”

“Product arrived promptly and in great condition. It fits well and feels good. The wife said that I haven’t snored since I’ve started using this. I sleep on my back which usually makes me snore more than on my side, not anymore! Admittingly it has taken some time to get used to having a device in my mouth but if you have used a mouth guard before it is no big deal. Customer service is prompt and courteous, I called to make sure I was using it correctly and they explained everything and seemed to honestly want to help.”

The hardest part for me about snoring devices is the awkward and uncomfortable feeling for me. This is why I PREFER the ZQuiet solution as it's much less intrusive, easier to get used to, doesn't require tongue displacement.

Try ZQuiet Here First
We earn a commission if you click this link and make a purchase at no additional cost to you.

The ZQuiet and the Zyppah look very different but work in somewhat similar ways so comparing the two can be tricky.

The ZQuiet is a classic jaw displacement device while the Zyppah combines jaw displacement with tongue displacement. While the idea of combining tongue and jaw control together is theoretically a good one, many companies with similar hybrid devices have found fault in them.

The Zyppah checks out well and certainly works for some, but it could be said that adding too much to the mouthpiece actually makes it less effective. As they say, sometimes less is more.

Anyone with experience with anti-snore devices knows that they can be hit-or-miss, and what works perfectly for one person offers nothing but trouble for another. The ZQuiet 30 Day Trial for only $9.95 is really inviting and helps customers test the product without fear of losing out on the money. ZQuiet has excellent customer service and those that have had complaints have their issues resolved for the most part.

Unfortunately, it seems as though Zyppah’s customer service is fairly poor and some have had an issue getting their money back, despite the 90-day warranty.

When it comes down to the pros and cons of both, as well as device design and cost, the ZQuiet comes out on top. Not only is it more affordable, but it is a more simple design that just works better for a wider range of people. It is overall more comfortable to use and is less likely to cause discomfort, such as gagging or drooling.

Having the tongue stabilizing device that holds the tongue in place can lead to drooling at night which may have a problem with. Some never adjust completely to this.

The ZQuiet is less intrusive, and though it may cause slight jaw soreness at first, the body is able to adjust to it more quickly compared to the Tongue Elastic technology of the Zyppah.

Bottom Line Recommendation: Unless you prefer tongue displacement devices, the ZQuiet available here is more likely to work for most people.

If you are a stubborn snorer or have already determined that it’s your tongue that’s the problem then going straight to the Zyppah is a better idea.

Additional Reading: Another possible solution and/or “thing to try” are anti-snore pillows. I’ve also reviewed the best anti snoring pillows to see which ones have the best chance at working.